My name is Steve Woolston, and I am a 5th Dan and dojo owner from England.  I recently visited Okinawa and stayed for a total of eight days.

During my short trip I had the opportunity to train on a number of  occasions with my teacher Arakaki Toshimitsu, Hanshi and also visited many  places around the Island, even taking a day out to visit the island of  Kume-jima.

The part of the trip that was most enjoyable to me, aside from the karate  studies of course, was having the chance to further my knowledge and understanding of the warm culture that seems to be found everywhere on  Okinawa. I have been lucky enough to have visited Okinawa now on ten  occasions since first travelling over in 2010, and each time there is  seemingly more and more to learn about its people, history and traditions.

As a dojo, we are already making plans for our trip in October/November  next year, and we are looking forward to it immensely. It is always  difficult to convey the gratitude that we have for the generosity of our  teachers and seniors in Matsubayashi-ryu, but perhaps the best way we can  show it is by continuing to work hard and by spreading the great work that  the WMKA are doing in supporting our efforts in following the  Matsubayashi-ryu tradition.

I would also like to take the opportunity to thank Ms. Becka Tedder for her  kindness and hospitality during my recent stay. 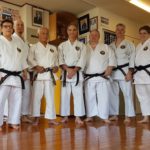 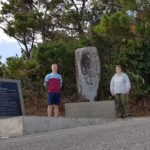 At the memorial for Taira Shinken Sensei on Kume-jima 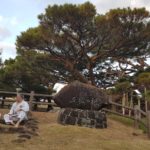 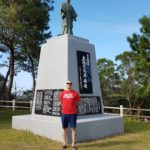 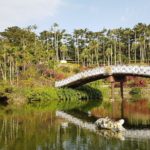 At the South East Botanical Gardens near Okinawa City 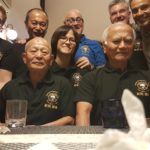 At the sayonara party at Arakaki Sensei’s home in Shikina 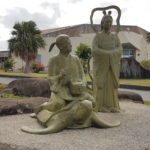 Statue showing the story of Urashima Taro, riding a turtle to the Dragon Palace. This was in Kume-jima. 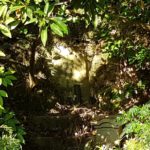 The tomb of Kyan Chotoku Sensei.