From November 6th through November 21st 2019, I visited Okinawa and Kume (Kumejima) Island. This was my fourth trip to Okinawa, but my first visit to Kume Island.

Upon arriving in Okinawa I had been dealing with a misplaced laptop computer and case at Haneda Airport in Tokyo. However the following day it had been found. Airport customs informed me that I would have to return to Tokyo to retrieve my computer. My international driver’s license and some Japanese Yen were in the case. My first night in Okinawa was spent at the Mercure Hotel not far from the airport due to my late arrival on the 6th.  For the rest of my stay, I stayed in a very nice Airbnb apartment in the Tsuboya district between Asato and Makishi Yui Rail stations.

The morning after arrival, I was speaking with someone in the hotel regarding my laptop and I was approached by the vice president of the hotel chain who offered his help. Through negotiation between the hotel manager and the head of customs at Haneda airport, an arrangement to send my laptop and case back to Naha with a hotel employee visiting Tokyo was possible with my signature and copy of my passport. Within a few days I had everything back with nothing missing! This was due to the kindness of the hotel staff. I was amazed and so very grateful.

Thanks to Mr. Riki Nomura I was given a great karate practice schedule. Mr. Nomura also brought me to the Karate Kaikan to become familiar with it in case I wanted to do some of my own practice there on my free time. It was wonderful to see it for the first time as it had not yet been built during my last Okinawa visit in 2014.

My training in Matusbayashi-Ryu karate started 50 years ago, in 1969 at the age of 13. This trip was special for me as both as a life experience timeline marker and a celebration. During my stay I had the great fortune of training in three Matsubayashi-Ryu dojos. These were the Taira Dojo, the Arakaki Dojo and the Tome Dojo. I was able to train multiple times in each dojo and received lots of help in preparation for my shinsa (test) which was to occur the following week at the Karate Kaikan.

During my visit, other foreigners whom I knew were training with me during various classes throughout my stay. This included Mr. Ole Bjorn Tuftedal, Mr. Helmut and Heidi Steeg, Mr.Heinz Tessner, Mr. Steve Trombley, Mr. Steve Woolston and Mr. Jason Christian.
Ms. Becka Tedder and Mr.James Pankiewicz who  both reside in Okinawa were also in some of my classes at the Arakaki Dojo.

In addition to the classes I was also able to attend a very lovely and enjoyable small dinner party at the home of Toshimitsu Arakaki Sensei. Also, as usual there were several nights spent socializing at the Dojo Bar in Asato.

On November 12th,  I tested at the Karate Kaikan and passed my Renshi, 6th dan test.  I did not expect to pass due to all the corrections I had received in the dojos I had trained in prior to the shinsa. I was quite humbled by the experience and grateful for all of the encouragement and help I received. After the test I was congratulated at the dojo bar and several beers we bought for me.

On November 16th, I departed Naha to head for Kume Island and the town of Kumejima to participate in the Ryukyu Kobujutsu Hozon Shinkokai four day celebration and seminar honoring Shinken Taira Sensei, well known as one of the great Okinanwan kobudo masters and famous as the preserver of Okinawan Kobudo in the 20th century. Shinken Taira sensei was from Kume Island.

During my stay in Kumejima, I was able to visit the memorial and burial site of Taira Shinken Sensei as well as other interesting sites. I was also able to meet up with Mr. Riki Nomura several times during my stay. Mr. Nomura is also from Kume Island and was instrumental in having Taira Shinken’s memorial site put on the tourist guide map of Kume Island.

My wonderful experience in Okinawa was made possible by Mr. Riki Nomura, Yoshitaka Taira Hanshi, Toshimitsu Arakaki Hanshi, Iwao Tome Hanshi and Toshimune Arakaki (my yakusoku partner at my shinsa).  In addition I’d like to thank all of my friends from around the world whom I trained with and socialized with and the wonderful people of Okinawa (including Kume Island) who were kind and helpful in many ways. 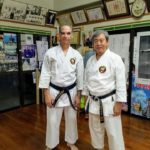 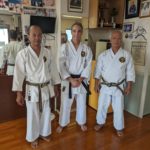 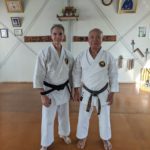 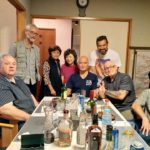 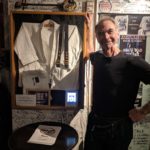 At the Dojo Bar with O’Sensei Nagamine’s Dogi. 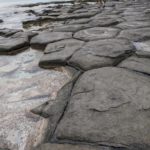 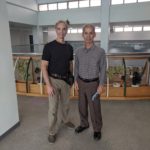 See you all next year for the O’Sensei Nagamine four day event and statute unveiling!