On 20 November 2019, Sensei Toshimitsu Arakaki, Vice-President of the World Matsubayashryu Karatedo Association (WMKA) arrived for his fourth visit to Australia, prepared to deliver a series of wonderful seminars for the dojo of the Matsubayashiryu Karate Association of Australia (MKAA). This year was an extra special year as the MKAA celebrated its 20th Anniversary, and the Cummings Karate Dojo its 10th Anniversary.

Beginning with his trip in NSW, hosted by Sensei John Carlyle (Chief Instructor Australia), Sensei Arakaki taught at three different dojo across the state, with training each morning and evening, being attended by around 30 students at each lesson. During the NSW seminars, the MKAA was also lucky to have guests from WMKA New Zealand, including Sensei Kevin Plaisted (Chief Instructor NZ), Sensei Tim Herlihy, and Ms Isabelle Plaisted, as well as a team of MKAA ACT members, and instructors from other local dojo.

The seminar series then continued, moving to Australia’s National Capital (Canberra), to deliver a series of seminars at the Cummings Karate Dojo, hosted by Sensei Reece Cummings (Head Instructor Canberra). Sensei Arakaki delivered a morning session and evening session most days, with evening sessions including kids classes attended by more than 80 students, and adults sessions attended by more than 60 students, each day. Seminars were attended by local students, MKAA NSW members, and also guests from other styles, including Shotokan, Kenbukan Gojuryu, Shorinjiryu, and GKR. During the Canberra visit, Sensei Arakaki also visited the National Zoo and Aquarium, the Canberra Nara Peace Park and Beijing Gardens, and Old Parliament House.

Throughout all seminars, Sensei Arakaki focused on the importance of the kihon-waza, especially the use of hips, whip and snap in every technique. More than 25 hours of formal training was delivered covering all Matsubayashiryu kata, formal and self-defence based bunkai, bojutsu and kumibo, saijutsu, but an uncountable number of hours was also spent learning about the culture, etiquette and history of Okinawa and karatedo.

The MKAA sincerely thanks Sensei Arakaki and the WMKA for their dedication, support, and teachings, and looks forward to continuing to pass on the lessons learnt. Thank you also to the instructors, students, parents, members, and friends that supported Sensei Arakaki’s fourth trip to Australia. 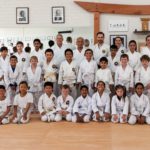 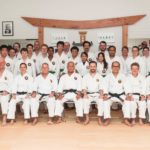 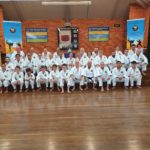 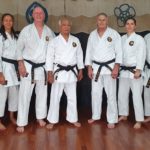 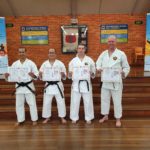 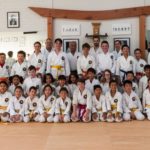