Having in mind and being proud to be a part of the one-of-a-kind family of Matsubayashi Ryu, it was again with a big anticipation and curiosity to be on Okinawa and having the chance to learn from the Sensei here again. Having the opportunity to sweat the Gi in the Dojo of the Sensei is always and will be a gift which is not possible to describe.

With the fantastic pre-work of Riki Nomura san it was possible again to get corrections, help, support and the feeling of being part of this wonderful family in the dojo and under the watchful eyes of Taira Yoshitaka Sensei, Arakaki Toshimitsu Sensei, Tome Iwao Sensei, Shinzato Masao Sensei and Miyagi Tugio Sensei several times. Having keiko with the Sensei shows always how far the way still is to go, but how wonderful this journey is and will be.

While it always wonderful to meet old friends and make new ones, it is also important to learn and see about the okinawan culture and nature. This year I have had the chance to be at Nakijin Gusuku and visit this impressive world heritage. I was from my first visit in 2010 impressed by the open minded, warm, heartly people of Okinawa.

For 2020 there will be on the schedule the next visit and participation for the unveiling of the memorial stone of Nagamine Shoshin Osensei end of October. The plan is to come to Okinawa with some of my stundents of my dojo here in Grossefehn.

It was a great experience to train with the masters in Okinawa again, in November 2019. For me, this was my 6th trip to Okinawa as a WMKA member. As dojo owner of a small dojo in Groningen, the Netherlands, it is a privilige to learn from the Matsubayashi-ryu sensei in the birthplace of karate. I frequently train together with Heinz Tessner, as our dojo’s are near to each other geographically, in the North-east of the Netherlands and North-west of Germany, respectively. It was therefore very nice to join him to sweat the gi in Okinawa, just like last year. This year, I again learnt a lot about principles of executing techniques and generating speed and power, in addition to correct kata performance.

Besides training at Taira sensei dojo, Arakaki sensei dojo, Tome sensei dojo, Shinzato sensei dojo and Miyagi sensei dojo, I was also able to visit the Okinawa International University in Ginowan. There, I have a collaboration in brain research of elderly people in Okinawa, who are known for their healthy aging and reduced risk of age-related disease. We are conducting a research project in which brain activity of elderly Okinawan people is compared to that of elderly Dutch people. We expect Okinawan elderly to have a more youthful pattern of brain activity in comparison to Dutch elderly of the same age.

Like Heinz, I hope to be present end of October 2020 at the international WMKA gathering in Okinawa, and I already very much look forward to meeting everybody there! 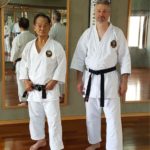 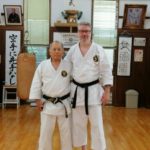 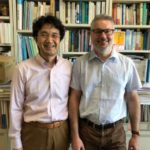 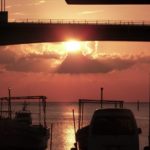 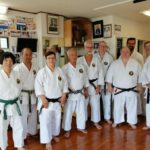 With Arakaki Sensei and other Matsuabyashi Ryu Karateka 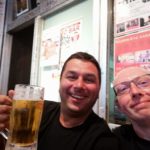 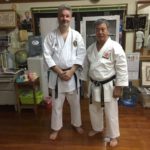 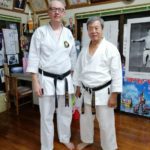 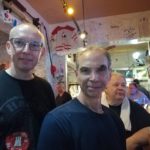 With Schlesinger Sensei at the Dojo Bar 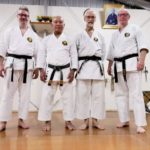