My name is Joel Castasus from Bristol, England and I visited Okinawa for the first time from 19th to 29th Oct 2019.  Although my main purpose was just to meet and train with the masters, I ended up with much, much more.

Training with the Masters
My first training session was at the Tome Dojo. I was nervous but equally excited. Tome Iwao Hanshi is 78 years old and a 9th Dan. My second training was equally or even more nerve racking! It was at the Taira Dojo. Taira Yoshitaka Hanshi is a 10th dan, President of the WMKA and Chairman of the Okinawan Prefecture Karate Federation.

My third training was with Arakaki Toshimitsu Hanshi. I was a lot less nervous meeting Arakaki Sensei, because I had settled a bit and also, I had met Arakaki Sensei before. He couldn’t remember me from a seminar 2 years ago, but I cannot blame him for this, as there were other students at that time and he actively travels and teaches around the world meeting new people constantly.  Arakaki Sensei is and he is 76 years old, a 10th dan and the Vice- President of the WMKA.

The fourth teacher I met was Shinzato Masao Kyoshi at the Ozato Dojo. Shinzato Sensei is an 8th dan and 76 years old as well. I felt a bit more relaxed, mainly because a few trainings were done and I knew some dojo etiquette and what to expect.  It was a good session with new inputs and corrections. According to Shinzato Sensei (as far as I remembered and understood), he used to teach at the Nagamine Dojo. It was interesting to experience his routine as this gave me a glimpse of how the Nagamine Dojo routine was.

The fifth teacher I met was Miyagi Tugio Kyoshi, an 8th Dan and 82 years old. Apparently, he was a bit slow at the training session due to the fact that he already had an early exhausting session in the morning and he just recovered from illness few days ago as well. As a first timer, I did not notice the difference. He was amazing to me on that day. At 82 years of age he was still strong and actually doing the class with the students and not just counting. His kama and eku movements were amazing.

Meeting with the Masters reminded me of Ikigai.  Ikigai is a Japanese concept that seems to be the secret of Okinawans long life. Of course, this is alongside with their healthy diets, dealing with stress, good environment etc. I am no expert with Ikigai concept or Okinawan lifestyle, but these Masters have been doing what they’re doing for decades. Learning, teaching in full circles, day in and out. You would have thought that they have seen it all, done it all and the interest and energy would have died done by now. But this wasn’t the case at all. It was quite opposite actually. They are very enthusiastic to share and join in the entire training.

I have included the ages of all the Sensei because I am in awe of their physical condition regardless of this. They are very really fit, probably fitter than some people of my age. Their love and dedication to Karate shows through and through. They walk the talk. Their skills, knowledge and attitude are worth copying. Now, I understand why there are many skilled and awesome Karateka, up to Yondan that do not want to be called “Sensei”.

It was a very humbling experience and for the brief visit and few trainings I spent with them, they made a lifetime impact. This experience I can hopefully share with my Bristol students.  Just a bit of tip coming from a first timer: When you have the opportunity to train with them, grab it and fully immerse yourself. I have said that I was nervous at first, but then I felt that they just genuinely wanted to teach you and help and all of this nervousness disappeared. They are extremely humble, but do your best!
Devil’s hands, Buddha’s heart – Nagamine Shoshin O’Sensei.

Visits to the Dojo Bar
My first stop (and almost every night) was the world-famous Dojo bar.  It is very easy to find, walking distance to Kokusai Dori and very near to the Shureido shop. This is a must-visit place if you are in Okinawa and a martial arts practitioner. There are loads of interesting stuff on display. One of them is the original dogi of Nagamine Shoshin O’sensei (how cool is that!).

The staff are friendly and the whole general atmosphere of the bar is good. I suppose it’s because the general customers are all Karateka from all corners of the world who just want to relax after training.

Just at the front is the Asato Dojo. They do children’s Karate and other various classes. I believe it is available to hire as well. I went inside to have a look around and the facility is great. I even managed to kick the heavy bags – whilst James San was not around. I was going to attend the evening class too, but due to a time constraint, I failed to do so. I have missed this great opportunity, but hopefully next time.

On this visit as well, I was able to leave my signature. The space was very limited and It was a struggle to find one. But a good, prime place was spotted by Mr. Guido Engels. “Shorin Bristol was there 2019. JC”.

Himeyuri Peace Museum
It is beautiful place to visit and would highly recommend it.  The displays were very touching to read and made me sad, but I was also informed and appreciative of the peace we are enjoying now.  This a very well-presented museum with a heart.  Somehow it feels like it is alive and it was trying to tell a story.  A sad story, but full of history lessons.

Karate Kaikan Museum
It was a fantastic 2 in 1 event for me on this day.  Initially, invited by Yoshitaka Taira Sensei, we were there to see the demonstrations of the Okinawan Master at the Shurei hall, but since we were there already, we also went to the museum.

The weather was good and the air was filled with excitement.  I was like a kid in a candy shop, it was like a celebrity show for me.  I saw famous masters like Higaoanna Morio Sensei, Shimabukuro Zenpo Sensei, Shinjo Kiyohide Sensei and many more.  Masters that I can have only seen via Youtube, Social Media and books.  I never thought that I would be seeing them in person. I was really thrilled.

Watching the Masters perform was really a privilege.  Seeing Taira Sensei demonstrating, Chinto Kata, in person for the first time was absolute an honour.   His demonstration was beautiful, flawless and purposeful.  Something that I should and will really aim for as a practitioner.

The visit to the museum was good for feeding myself with some historical facts about Karate.  They have interesting displays and loads of historical information.  There are also some artefacts, which are really fascinating. Unfortunately, taking photos is not allowed. Karate Kaikan Museum is worth a couple of visits to fully appreciate the contents.   I will definitely come back again.

Karate Day
Participating in the World Karate Day demonstration on the street of Naha, Okinawa gave me a goose bump.. There were thousands of people, men and women and children from around the world demonstrating a single Kata, shouting at the same time, expressing their spirit. To me, we are saying “this is karate and we love karate” to the world.

Nagamine Dojo
I may not have had the opportunity to train at the Nagamine Dojo, but I was happy that I still managed to see the building. I had to check it out 3 times, just to talk to it, admire its beauty and also to say thank you to Nagamine Shoshin O’Sensei for creating the style. Also, for creating a unique Karate culture of people with great skills and good heart at the same time. Sorry to sound romantic, but this is my interpretation and genuine feeling.

Okinawa Peace Memorial Park and Peace Hall
It is a massive space and I do not think a quick tour will be enough to appreciate the place. I will not be able to explain much about the gravity of the place to the Okinawans as I am not an expert. But in my simple understanding, this is a very important place and one of those reminders that war is not good and let us remember those who suffered because of it.

I was deeply saddened by the news that it was destroyed just few days after we visited.  This made my visit extra special, because on the day that Martin and I visited the Castle, Martin was not feeling well.  But, Martin as a friend made a promise to himself that he will take me there and so he fulfilled that.  I have learned the lesson that “Do what you can do today, tomorrow is not promised to no one”

I am certain that the Shurijo will rise again, through the help of the Okinawans and the Karate people around the world.  We will go back there again, once it has been reinstated to its full glory.

I have visited few more other places.  Most are Karate related and I would like to go on adventure to find more next timevBelow is the list of the other places I visited and you will find photos and article about it in my Matsubayashi Bristol England page in facebook and Webpage in the future.

My entire visit to Okinawa was very brief (10 days to be exact).  But it was not hard for me to feel all the goodness of Okinawa.  I came to visit with the just the purpose of Karate, but I ended up falling in love with the place.  Okinawa is a lovely place to be.  It is quiet, peaceful, beautiful, rich in culture and it has load and loads of places to visit and see.  And the most important thing is that the Okinawans are good and friendly people.  The whole time I had spent was full of Karate, culture, food and places. It was a fantastic first time experience and I do not think this will be the last.  Until next time Okinawa!

Special thanks to Mr Rikki Nomura for arranging my training with the teachers.  He has been very welcoming and it was a pleasure to meet him in person at the Karate Kaikan and share drinks at the Dojo Bar. 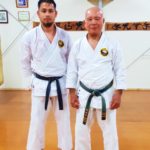 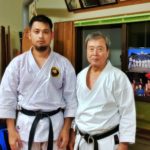 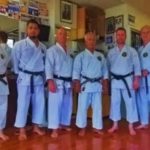 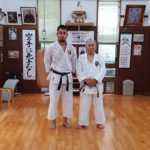 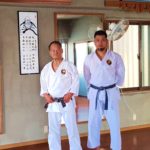 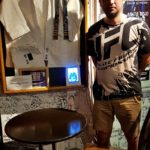 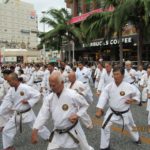 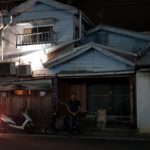 In Front of the Original Nagamine Dojo 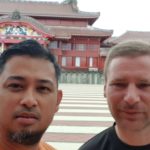 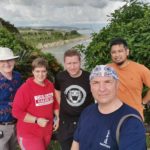