Martin O’Malley 4th Dan and Michael O’Neill 3rd Dan from Ireland visited Okinawa from the 20th to the 28th of October for their second visit of 2019.  As always they received a warm welcome from the teachers who had prepared a schedule of training of between two and three times per day at various Dojo.

During this visit they were hosted by Taira Sensei, Arakaki Sensei, Tome Sensei, Miyagi Sensei and Shinzato Sensei.  The training at these Dojo which saw them practice Basics, Kata and Partner Exercises for both Karate and Kobujutsu was very intense but very beneficial for both men who felt that this level of training was very important for their further development.  Both men were very grateful to each of the teachers for their continued support and guidance.

Friday 25th of October saw the Karate no Hi demonstrations at the Karate-do Kaikan which they had the opportunity to attend.  Taira Sensei was among the teachers who demonstrated at this event where he gave an outstanding performance of Chinto.  Just before the demonstrations began they took a tour of the museum at the Karate-do Kaikan where there were many very interesting displays of Karate and Kobujutsu artefacts.  That afternoon they visited Matsuyama Park to check out the 100 Kata Challenge organised by Challenge Okinawa.

On Sunday 27th October they joined a group of 2,100 Karate practitioners to demonstrate Fukyugata Ichi and Fukyugata Ni on Kokusai Street and after as part of the Matsubayashi-ryu demonstration the group performance of Wankan and Wanshu.  Both men agreed that it was a wonderful experience to be a part of this event.

As well as Karate related activities they had an opportunity to visit many local sights including Shuri Castle, Shikina Gardens, Fukushu Gardens, the International Cemetery, the Furuherin Cave, and the Matsumora Kosaku Memorial Stone in Naha itself.  In Yara Kadena they visited Yarajoshi Park, the Hija River and the Kyan Chotoku Memorial Stone while in the south they visited the Okinawa Peace Park, Hemiyuri Peace Museum and even had a chance to do some star gazing on the southern Okinawa beaches.

They were also lucky enough to visit some award winning businesses.  The first an award winning Okinawan Soba Restaurant named Minosaku which is located at 3 Chome-8-1 Kumoji and of has a range of Soba and many other Okinawan dishes on the menu.  The second the café of a champion barista at The Corner Coffee & Beans at 1 Chome-14-13 Matsuyama which offers an extensive range of coffee from around the world.  Of course the Dojo bar on Sogen-ji Dori owned by Matsubayashi-ryu Karate-ka James Pankiewicz provided a great place to relax after training and meet with other Karate practitioners from around the world.

Speaking about the visit Martin O’Malley said that ‘Karate training on Okinawa is always fantastic experience, the teachers put so much time and effort into ensuring that we have a chance to maximise on our training and we take away so much from these visits.  We really do appreciate their efforts’.   Martin added that ‘there is also so much to see and do outside of Karate around the island that each visit always seems too short to do it all!’

Michael O’Neill was keen to encourage all who can to visit Okinawa for Karate training saying that ‘Okinawa is becoming much more accessible to Karate-ka, and the teachers are very supportive and encouraging for all who make the journey.  For anyone considering travelling to Okinawa for Karate I would say just book it and go, you will have a fantastic experience’.

Both men felt that 2020 will provide a great opportunity with Martin telling us that ‘with the unveiling of the memorial stone of O’Sensei Nagamine and associated seminar happening at the end of October and the start of November 2020 hopefully as many people as possible will use this excuse to come and to visit Okinawa and to be a part of this wonderful celebration of Matsubayashi-ryu’. 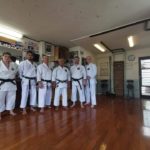 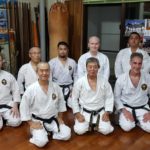 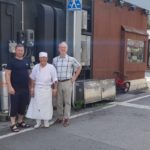 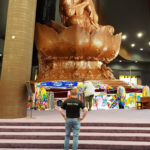 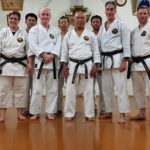 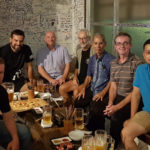