On September 20th and 21st, 2019, Westminster Matsubayashi-ryu Karate-Do Club of Swansea/ Belleville, IL. the Dojo of Ed French, 6th Dan and Marsha Lauko, 5th Dan, sponsored a WMKA Seminar. We were honored to have Toshimitsu Arakaki Sensei, Hanshi, 10th Dan and Vice President of the WMKA lead the seminar.    The seminar opened with comments from Fred Christian, 8th Dan, Kyoshi and Ed French, 6th Dan who stated the two objectives of the seminar were to learn from Arakaki Sensei and have a good time.   Over 85 WMKA members attended the seminar including 20 Dojo owners from England, Ireland, Australia and throughout the United States. During the seminar Arakaki Sensei reviewed Fukyugata I and II,  Pinan III and bunkai, the seven Yakusoku Kumite with some minor modifications, two Bo Kata and Bo bunkai. Participants were very complimentary of the attention and help they received to ensure they were using proper technique not only from Arakaki Sensei but also from Senior Ranked Dojo owners such as Scott Mastin 7th Dan (Ohio),  John Carlyle 6th Dan (Australia), Gerard Cappiello 6th Dan, (NY), Fred Schlesinger 5th Dan (NM), Steve Woolston 5th Dan (England) and Martin O’Malley 4th Dan (Ireland).  We owe a special thanks to Takeharu Nishida, 1st Dan for his assisting Arakaki Sensei as an interpreter.

Mike Munie, 3rd Dan of the Westminster Dojo and his wife, Susan, hosted a Friday evening gathering at their home for Arakaki Sensei and the dojo owners. The seminar program ended with a Banquet with over 90 attending.  Short speeches were given by Arakaki Sensei, Fred Christian and Ed French who thanked so many for attending and supporting the seminar. Ed French asked if we should do it again in the St. Louis area in two or three years so that we continue training together while having a good time doing it.  There was an overwhelming “yes.” On Sunday morning over 30 attended an informal breakfast to say goodbye to friends and Arakaki Sensei. 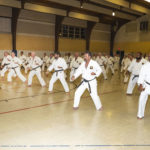 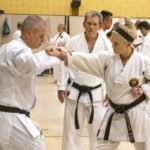 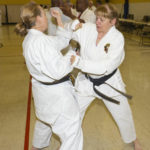 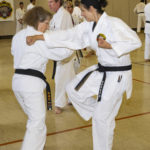 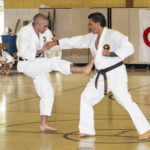 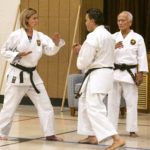 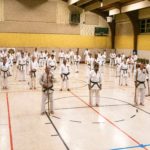 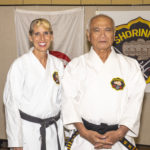 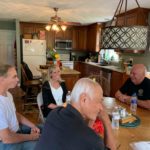