Over the course of the weekend from Friday 31st May to Sunday 2nd June, around 50 members of the European Matsubayashi-ryu Karate-do Association (EMKA) gathered in Eastbourne, England for their annual ‘Taikai’ event.

Each year this event is hosted by a different country within the membership of the EMKA/WMKA and this year the honour fell to the dojo and students of Steve Woolston, Sensei to welcome teachers and students from no less than seven different European countries – England, France, Germany, Ireland, Netherlands, Norway and Spain.

On Friday evening the event was officially started, and the attendees were welcomed by the head of the EMKA, Ole-Bjorn Tuftedal Kyoshi (7th Dan).  Following the brief welcome speech, the majority of people were put through their paces with a class led by Sally Woolston Sensei (4th Dan) during which she covered basic kihon, along with Fukyugata Ichi and the associated formal bunkai.  Everyone was encouraged to perform for the group in small teams of three people, and it got the weekend off to a fantastic start.

At the same time on Friday evening, under the watchful eyes of Tuftedal Kyoshi, Steve Woolston Sensei (5th Dan) and Martin O’Malley Sensei (4th Dan), a karate-ka from England, Joel Castasus, was being put through his paces with the invaluable assistance of Eirin Edvinsen.  Joel successfully tested for his transition to the rank of Nidan in Matsubayashi-ryu, and this follows a lengthy journey from his previous experience in Shorin-ryu, marking the culmination of much hard work.

Bright and early on Saturday morning, the attendees met again, this time at the wonderful facilities provided at the University of Brighton and a full day of training commenced at 9:30am.

The various teachers revolved throughout the course of the day until the finish at 4pm, and everyone had the fortune to cover the following topics:

Everyone came away from the day with much to think about, having covered such a great deal of detail, and so the evening gave us all a good chance to socialise and enjoy making new friendships and strengthening old ones.

The final sessions on Sunday morning saw slightly less people training, but a few people had already started to make their journeys back home.  Those who came along, however, were treated to two rooms of training opportunities, with one room focussing on Shiromatsu no Kon kata (with Heinz Tessner, Sensei – 4th Dan, Germany) and then bunkai with Steeg Sensei while the other room worked on kihon from Fukyugata Ichi and the kata itself, led by Woolston Sensei.

The weekend was a huge success, due in part to the wonderful Eastbourne weather but, in the main, due to the open-minded and friendliness of the attendees and teachers alike.  Roll on 2020 Taikai, due to be held in the Netherlands. 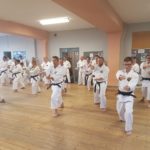 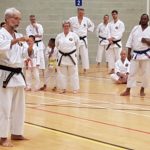 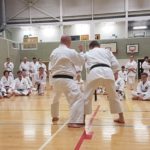 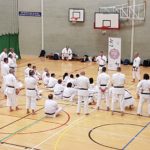 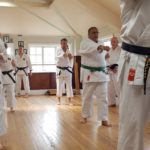 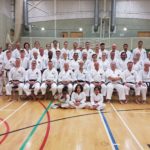