Martin O’Malley and Michael O’Neill travelled from Ireland to Okinawa from the 20th to the 27th of April 2019 to practice with the senior teachers on Okinawa.

On the first full day of their visit (Sunday 21st) they travelled to the north of the Okinawa Island along with James Pankiewicz to take part in the Shioya Bay Trim Marathon which they completed in good time.  It was a great day out in a beautiful part of the island and both men highly recommend travelling north to see this area if possible.

The following morning it was on to training two to three times daily training including visits to the Taira Dojo, Arakaki Dojo, Tome Dojo, Miyagi Dojo and Shinzato Dojo, and they were lucky to be joined at some of the classes by Reece Cummings from Australia as well as the members of the various individual Dojo who were very welcoming and helpful.

Training took in lessons on all the important aspects of Matsubayashi-ryu, improving basic techniques, Kata performance, Yakusoku Kumite, Kata analysis and Kobujutsu and after a week of focused study time there were many lessons gained and things to be worked on before the next visit.

“Learning directly with the teachers on Okinawa is an important part of ensuring that we continue to improve in our personal practice’ Martin O’Malley said, adding that ‘taking the time to make this trip is something that I really enjoy having the opportunity to do, and I look forward to it each time.”

Michael O’Neill felt that “a complete immersion into Okinawan Karate and Okinawan culture is the best way to gain a deeper understanding of Karate, its origins and its purpose.”  He added that travelling to Okinawa is ‘an important aspect to the practice of Karate, and particularly for us Matsubayashi-ryu.

Seen as difficult and expensive both Martin and Michael were keen to emphasize that the opening of several new air routes via China and Taiwan, and the work which the Okinawan Government and Karate organizations are doing to promote Okinawa as the birthplace of Karate are driving down the costs of travel and visiting Okinawa making this once arduous journey more easily accessible to people all around the world.

They felt that the hard work and support of the teachers makes the journey worthwhile, and of course the opportunity to see the beautiful island of Okinawa is an added bonus.  From coral diving to island hopping, exploring history to jungle hiking, they were keen to emphasize that Okinawa Island and prefecture has some truly wondrous treasures awaiting those who make the journey.  They recommended contacting the overseas coordinator Mr. Riki Nomura (kume14makabe@yahoo.co.jp) to help planning a trip to the birthplace of Karate. 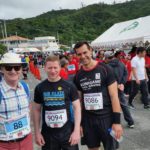 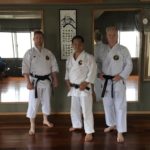 With Miyagi Sensei at his dojo 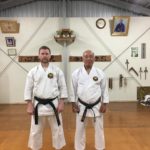 Martin O’Malley with Tome Sensei at his dojo 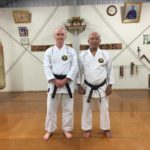 Michael O’Neil with Tome Sensei at his dojo 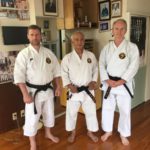 With Arakaki Sensei at his dojo 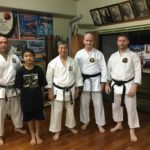 With Taira Sensei at his dojo including Bunshiro Nagamine 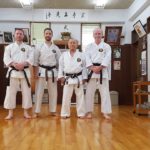 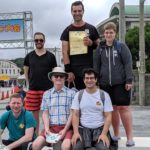